In the 2012 Annual report, the Juvenile Delinquency Working Group recommended that the Operation Ceasefire strategy be reinstituted in Trenton to reduce gun violence. The main goal of the initiative is to recruit and train outreach workers who will be able to engage high risk victims and their families, as well as the families of those who commit violence, in meaningful dialogue about ending the cycle of violence. Workers will be able to link the victims and families to social services, distribute materials that encourage residents not to retaliate, and organize activities that aim to defuse tension. 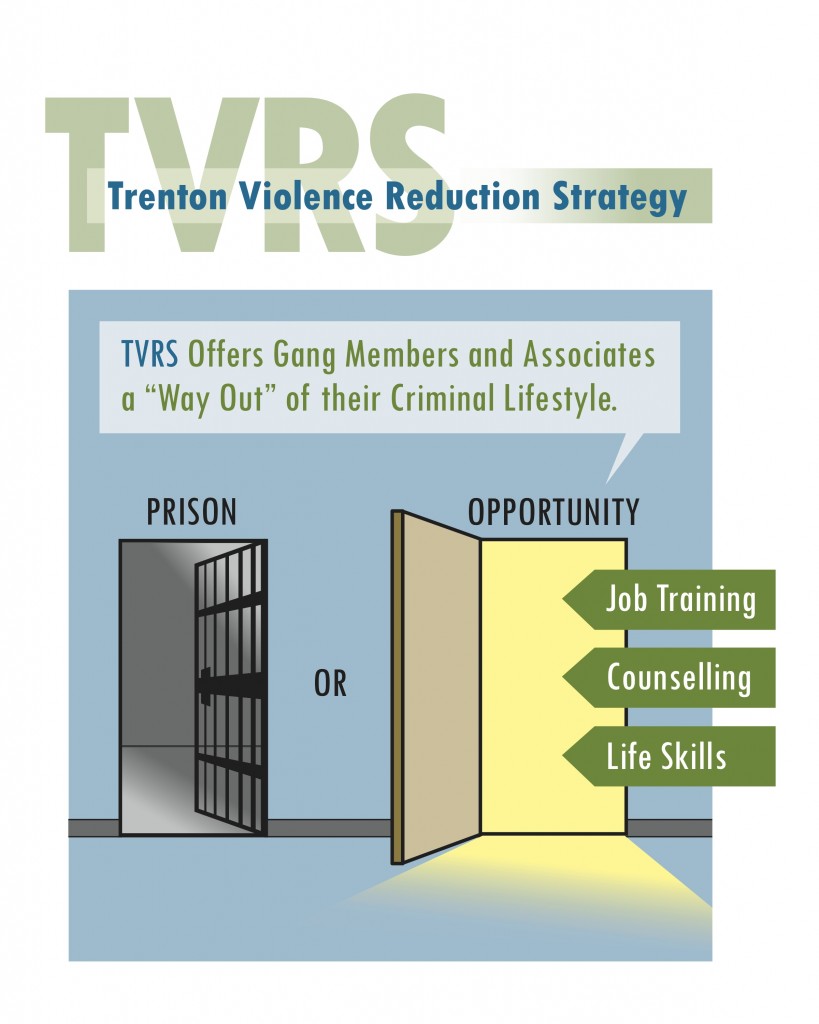 On September 26, 2013 the New Jersey Attorney General’s Office awarded the Trenton Police Department and The College of New Jersey a $1.1 million grant to implement a hybrid version of Operation Ceasefire, entitled the Trenton Violence Reduction Strategy. The TVRS is built on evidence-based models such as Ceasefire and Project Safe Neighborhoods that have proven successful in other parts of the country, but has been tailored, based on an analysis of crime trends, to meet the specific needs of Trenton. The TVRS strategy takes a holistic approach to assisting those individuals and their families by deploying social services and outreach workers into neighborhoods experiencing high levels of criminal activity. The strategy offers needed counseling, job training, and other aid as an alternative for young people who might otherwise engage in criminal activity, while maintaining a firm message of deterrence through the unified effort of federal, state and local law enforcement for those who refuse to change their behavior.

To date, eight paid outreach workers have been hired and trained, and connected with a caseload of five individuals and their families in two neighborhoods in Trenton. Isles, Inc. is serving as the lead social services agency, providing youth and families in the program with necessary services, or referring participants to other organizations in the Trenton area.  Two call-in meetings have taken place thus far, during which law enforcement personnel, social services provider, outreach workers, faith leaders, and other community members spoke directly with those youth and their families who are committing or are victims of violence. The call-in provides participants with information on the resources available to those in need, as well as the heightened consequences for those who continue delinquent and criminal behavior.

As part of its set of recommendations, the Education Working Group proposed that the eighth-grade transition program at Trenton Central High School (TCHS) be expanded to include all eighth graders in the district who are moving up to TCHS. The Education Working Group collaborated with the Trenton School District, Mercer County Department of Human Services, and other partners including Princeton-Blairstown to develop and implement an evidence-based eighth-grade transition program in the summer of 2013.

The four-week program, entitled Tornado Alley Transition Summer Experience (TASTE), provided classroom instruction taught by Trenton Central High School teachers, brought students to TCNJ’s campus to participate in the REAL Game, an evidence-based program evaluated by the University of Massachusetts, and included a week of adventure-based experiential education at the Princeton-Blairstown Center. The evidence-based programming was designed to help prepare students for high school in the 2013-2014 academic school year. The partnership between TCNJ, Trenton School District, and Princeton-Blairstown will continue throughout the year as evaluations of the program are conducted.

The College of New Jersey and Trenton School District are currently working together to complete an assessment of the program, the results of which will be used in organizing future programming.

The Education Working Group, as part of its group of recommendations in the 2012 Annual Report, proposed that a pilot program be established in which TCNJ students in the Masters in Counselor Education program conduct their practicum hours at a Trenton school. The program would benefit Trenton schools and students by providing additional staff to assist with the substantive counseling tasks that have been demonstrated to lead to student successes. It would also benefit TCNJ counselor education students, as they would receive valuable and mandated field experience under the supervision of a full-time school counselor. As of the spring of 2014, seven TCNJ students have completed the program, delivering a total of 4,200 hours of counseling to the Trenton school system.

Since much of the juvenile justice work is focused on mentoring programs, the Working Group on Domestic Violence wants to ensure that mentors are well prepared for this responsibility.  The Domestic Violence Working Group recommended, in the 2012 Annual Report, that mentoring programs offer on-going trainings for their mentors.  In addition, mentors should be trained on how to properly respond if a mentee reports having to deal with domestic violence and sexual assault at home or in their personal life. The Mercer County Youth Services Commission incorporated this recommendation into their grant awards for mentoring programs, by requiring that all requests for proposal include trainings for mentors on the impact of domestic violence on children and how to effectively respond.

The Domestic Violence also helped in the implementation of this recommendation by offering three free trainings for mentors in Trenton on how to properly respond if a mentee reports having to deal with domestic violence and sexual assault at home or in their personal life. These workshops covered several topics, including domestic violence 101, media literacy, and bystander intervention with the Rutgers SCREAM theater program. The sessions trained participants on how domestic violence can affect youth, the affect of the media on young people regarding the portrayal of gender and relationship norms, and how to help young people understand how to address domestic and dating violence among their peers.

The Employment Working Group recommended, in the 2012 Annual Report, that an RFP be developed by a foundation or other major funding institution for the creation of a social entrepreneurship site, similar to that of “Homeboy Industries,” as this could provide the platform for a local organization such as Isles, Inc. to host such a program. Homeboy Industries (HBI) is a comprehensive job placement, training, and education program, founded by Father Gregory Boyle in East Los Angeles, CA. HBI has been touted as highly successful by media organizations, educators, and law-makers.

The Employment Working Group worked with a Cost Accounting class at The College of New Jersey taught by Professor Bea Chiang in the fall of 2012. The class began the process of developing business modules and identifying the true cost of developing a business that would hire youth in Trenton. More recently, A Better Way and CityWorks have collaborated in an effort to open a business in the city as part of a social entrepreneurship model, similar to Homeboy Industries. The goal of the project is to establish a for-profit business with a social justice mission, to provide those hard to employ individuals an opportunity to make a living while gaining valuable work experience.

The Education Working Group has been working with Trenton Public Schools to bring Dr. Debra Ward to Trenton and work with the school district to implement data-drive policy making. Dr. Ward and Rutgers University’s Economic Development and Research Group have worked with Newark Public Schools on the Multiple Pathways to Graduation program, which helps build the district’s capacity to track, analyze, and instrumentally use data to support the success of its students. Together, they will work to develop a profile of the district’s student body, and develop an “at-risk student measure” that considers academic, social, and environmental factors that makes individuals students more likely to drop out. Newark’s public schools can then use this information to focus its resources on those programs that produce the best results. The Education Working Group recommended that such a program be brought to Trenton.

The Education Working Group connected Dr. Ward with the Trenton School Board after she presented to the full Trenton Prevention Policy Board in 2011. Since then, the school board has hired Dr. Ward to implement the Multiple Pathways to Graduation program in Trenton. In December 2012, Dr. Ward presented her progress in Newark and Trenton, to date, to the Trenton Prevention Policy Board. Dr. Ward’s team continues to work closely with the school district to gather, analyze, and disseminate important information and data to improve student performance.

National and State Reports and Resources: